Which Philips player is this.

One is called the 930 so is that a cheaper version of the 951?and is it a prototype or producion one 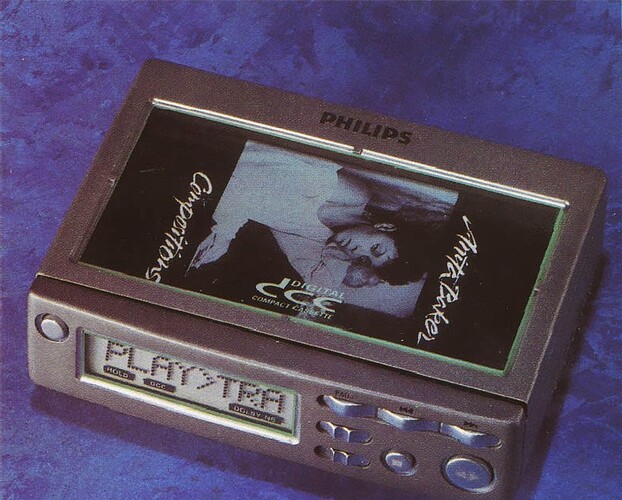 Hi,
All of them where proto. We believe they were never produced.

That is defo the coolest DCC portable ever!

It sure looks very compact and love the fact you can see the album art. Think that was the biggest surprise that DCC players seem to have drawers and limited windows to view the art work when in the player

The first picture is a prototype based on the FC567 double cassette deck from 1987 (I used to own one and I have one again now). They replaced the left deck with an LCD display and changed the function of some buttons. The awful black-and-white pictures came from a German magazine as far as I know. Most likely, the prototype was mostly empty and was connected to a big case full of electronics because it took a while before Philips could integrate all the chips.

The portable is a prototype, possibly a non-working mock-up. The DCC Museum has a DCC-180 portable prototype that once worked, according to the donateur, but that looks slightly different if I remember correctly.

I don’t have a photo of my FC-567 and it’s buried in the garage right now, but here is a picture that I just grabbed off eBay. 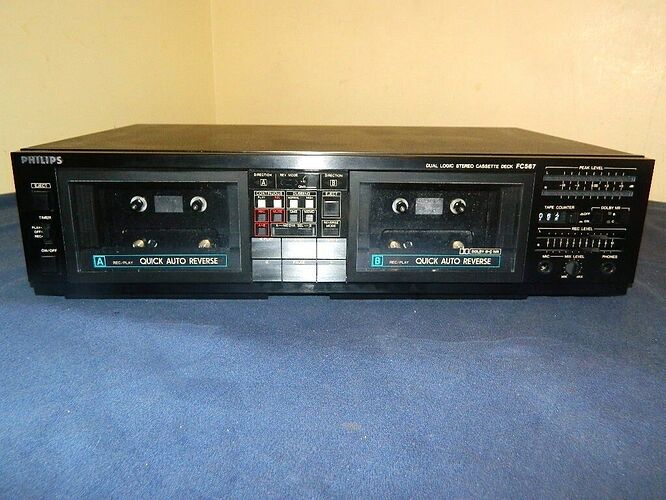 This is a great recorder, made in Japan by Marantz, with two auto-reverse recording decks. It can do continuous playback and recording of two cassettes, or it can do simultaneous recording of two cassettes. You can also play back a cassette in a different order by programming it kinda like you program a CD player. It will use the silences between the songs to detect that a new song has started and it will fast forward and rewind as needed to go to the next programmed song. You can even use this feature when you copy a cassette (in normal speed or high speed): when a song on the playback deck ends and the deck needs to rewind of fast forward to go to the next song, it pauses the recording deck until it starts playing the next song. And all of this can be done with the remote control as well as with the front panel buttons.

Audio quality is pretty good, it has a very decent implementation of Dolby B and C (recording and playback of course). Of course it’s not a Nakamichi (so only two heads per deck and no adjustments for bias and equalization) and the solenoid-controlled mechanisms make it impossible to do accurate editing, but I always loved this deck.

@jac thank you for sharing your knowledge. It is much appreciated. The dcc180 sure looks amazing They all look so good:)

Looks a bit like a VCR don’t you think?

Haha they probably just put a sticker on it:)

That last picture is an Optimus DCT 2000. It was for sale here in the USA from RadioShack, so not a prototype and not a VCR mock up.

I owned one of those a long time ago and donated it to the museum for parts. The eBay seller had basically put it in a random cardboard box with some loose foam around it, and it got badly damaged in the mail, and then got lost. After 3 months they finally found it and I picked it up at the post office. It wasn’t working at all and I got my money back. There are no schematics for it but it used the same mechanism as the DCC 900 and the same plugin circuit boards. The rest of the design is probably by RCA or Thompson.

By the way there’s someone in Poland who owns a DCC 930 which is basically a DCC600 with a 900 style to it. I suspect they probably cancelled it because they still had plenty of DCC900 in stock, and there were already so many other 2g models. The guy in Poland put it up for sale but then changed his mind.

The DCC 180 portable was a prototype that was never released. In most pictures it looks like a mockup and I think there may have been several variations of the design. But it actually exists, Gijs Wirtz donated a prototype to the museum. It doesn’t work anymore unfortunately but it did at one time before we got it. It has many patch wires and some unmarked IC’s. It may be possible to get it working again sometime in the future but there are many other things in our plate that have a higher priority or are easier to accomplish.