My personal opinion about dcc:
-Turbodrive is bad for cassette tape band path and specially for the felt pad
-Philips mechanic is brittle
-DD82 is the best deck for the sound and perhaps mechanic
-DD82 is good to do bodybuiding
-dcc730 is good to heat environnement
-dcc300 is a cute deck but the drawer is very slow
-Scms killed the format

Finally, it’s a great technology. I hope you will appreciate this marketing document. 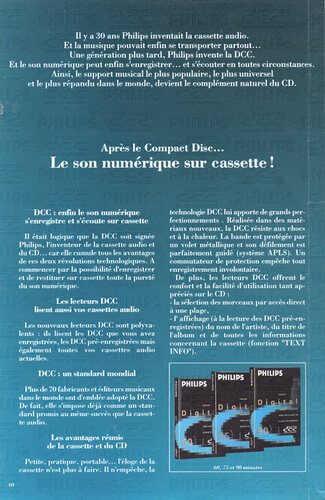 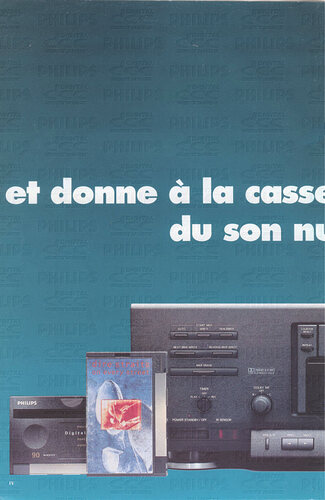 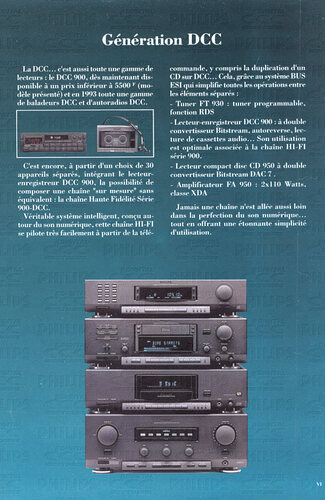 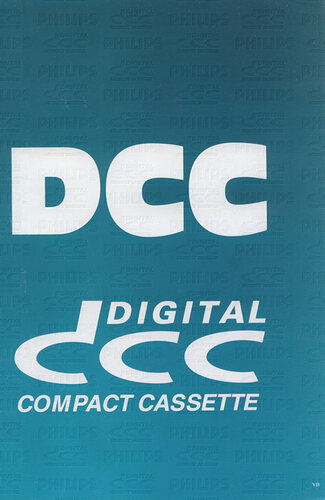 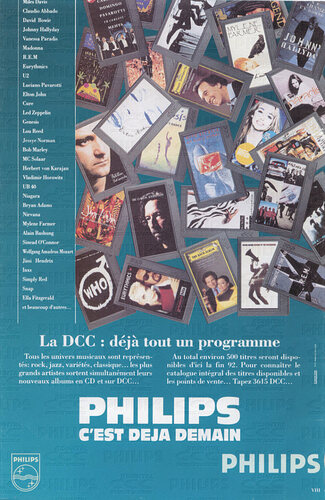 Hello Xavier and welcome to the forums! Tha’s a nice poster you have there.

SCMS is easy to defeat, you can buy devices on Amazon for less than 40 Euros to do it. Usually an HDMI to SPDIF converter will not have an SCMS signal.

As for why DCC was killed… I think there are some important reasons that are much bigger than SCMS. But that’s a whole different discussion.

I think it has some bug(s) in the firmware that make(s) it refuse to record from a source other than a CD player or prerecorded DCC. I suspect that it has something to do with the fact that the meaning of one of the SCMS bits is reversed for sources other than CD. I remember trying to copy a DCC from a DAT tape once, and the DAT tape was recorded through analog input, and the DCC730 refused to copy it. Fortunately I have an SCMS defeater that changes not only the copy protection bits but also the bits in the subchannel that tell the recorder what kind of device is playing the audio.

Try recording it with the DCC300 instead. Maybe that works better.

I was wondering why the Apple TV classifies itself as a CD player via HDMI, maybe this has to do with it.

I doubt that Apple cares about that sort of thing. If it classifies as CD player, it’s probably because they didn’t send the command to the digital audio output chip to change the bits from the default value into something else.

In fact, i’ve tried directly behind the TV, A

A Philips however ! it was behind the marantz and right now record stopped with message “scms stop”.
i’ve tried behind my blue ray disc player, a sony bdp790, here, record is OK for CD, when i use DLNA protocol for read file from my PC … scms stop.
about your question why ? For the fun of course !!
When i want to record music from you tube for example, i extract tracks, i make a CDRW and i record it in DCC, it’s for the fun of course !
i realized i’ve not track auto incrementation using BDP Sony but using my old philips DVP720, it worked. In the past i use this to record dcc
Amazing no ? thanks

Hello,
Yes !!! then scms disapear using a converter, all right, i 'm going to try this using the second HDMI out of my ampli

Hello, do you know what is this cassette player on this brochure, for years i try to know that Both the car stereo and the portable on those pictures are probably mock-ups that were never released as actual products.

The DCC museum has a prototype portable recorder DCC-180 which was often used in promotional material with the “Pretty Woman” cassette in it. I can’t really tell if the portable on this poster is the same recorder; it looks like it has an analog cassette in it or maybe it’s shown without cassette.

The DCC-180 at the museum doesn’t work at the time of this writing. I hope we can fix it one day.

So it did work at some point in time? I thought it was some kind of a visual mock-up?
It must be very advanced for dcc portables… it is so small, having record capabilities and all…

The DCC 180 used to work before we got it. @drdcc and I had a look at it a while ago. If I remember correctly, it looks like the CPU doesn’t start up. It has a number of chips inside that are unlabeled which makes troubleshooting harder. There’s no documentation so all we can go by is what we know about other early recorders. And it has various patches which make it fragile.

The bottom line is: making it work will take some reverse engineering, and I’m reluctant to move the insides around too much, for fear of breaking it further. The chance that I would break it further is high and the chance that I can make it work is low. So I’d rather work on something else that has a higher chance of success. But still, like I said, some day we may make it work.

If you could just ttack down the person who worked on this… he or she might be able to help? If I was that person I would be glad to, but somehow I think things don’t work that way…

But I can relate to your reluctance… I’ve worked on priceless camera’s in my capacity as a camera repair guy… multiple 1000’s of euros worth of Leica’s scare the hell out of me. One wrong move or slip of tool and the value is down by a huge amount. I walk away loads of time when I feel stressed or tired. Never gooved up though up until now…