DCC 134 eating tape only playing side B

I repaired a DCC 134 (changed new belt) which plays fine for Side A only. Also Rewind and Fast Forward seems to work fine. The only problem is that while try to play side B of the tape, it almost immediately gets eaten

. All other components seem to look still okay to me. So do you guys have any idea what can be the cause/solution?

Added is a picture of the inner part of the DCC 134 where the tape get stuck. Around the black rubber wheel!

I repaired several DCC 170 and DCC 175 players but this time I am a bit puzzled.

Thanks in advance for your replies, advice and tips & tricks! It could be the pinch roller, but first check if you hear the clicking sound when it changes from side A-B. On side a press stop , open the lid, remove the DCC and check the position of the sliding part of the pinch rollers. Do the same for side B. That way you know if the mechanism is moving correctly.

Check a/b switch with a multimeter. If oxides have deposited on the contact surface, there may be no connection.

@Dr DCC and Djay, first of all big thanks for your replies!

The issue gets a bit stranger…(Tests based on a 90 Minute Philips DCC tape and a universal power supply which worked perfectly with both a DCC 170 and DCC 175):

Could it be that power supply might be underpowered during playback (and switching) at the end of a tape? I again checked the belt and pinch roller position after switching (as suggested by Dr DCC), but all seems to work fine. So I am a bit clueless here, especially that once playing it runs flawless until manually switching sides other due to next track search when it automatically switches back and forth to position.

I still need to try a 45 min tape to see if the tape length might cause the issue in this DCC 134.

Again thanks upfront for any feedback, suggestion, etc… 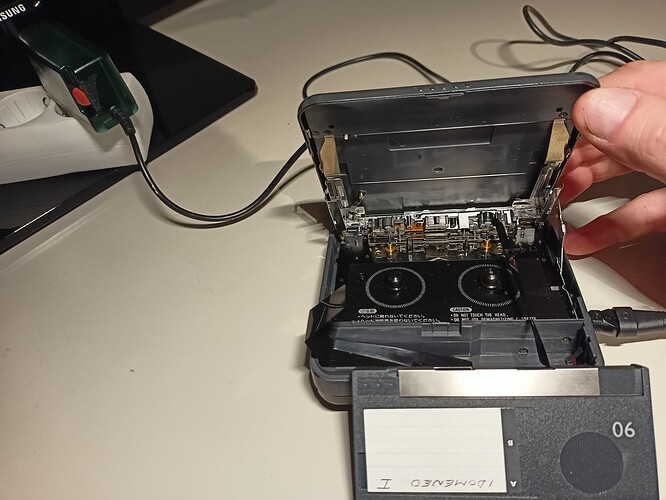 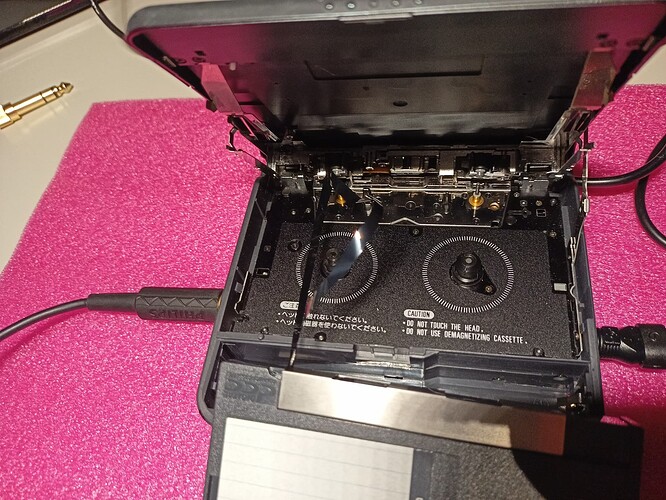 To see if the mechanism is moving correctly or if the pinch rollers are the problem, you could remove the lid, That way you can visually inspect while playing.

I doubt that voltage difference can cause this.

Could it be the belt? I find that these mechanisms are very sensitive to the characteristics of the belt: too thick, or too small, or not tight enough, or too tight. A slipping belt could cause tape jam.

It is not the belt as I tried 3 different belts and each time the result is the same. I don’t think the pinch rollers are the issue as they look okay (not hardened nor damaged, etc…). So I am clueless

. The mechanism seems to switch correctly while testing with the cover opened (hold the white top switch and the 2 switches near the battery compartment). Then the mechanism switches the the left, runs twice and then switch to the right to run once before it powers off.

Not sure if the right pinch-roller positions itself correctly to the back enough, but the tape eating happens on both sides (depending on how many tape is played OR left from the side it playing).

Another thing I sometimes experience is that during Rewind or Fast Forward, at the end of the tape the gears make a rattling sound although the end of tape is reached. Then it does not stop from the rewind or fast forward action. Similar to the noise when you check a new belt by manually change the black lever position and then manually turn the motor left and right. At a certain point it does the same constant clicking/rattling.

Thanks in advance for any suggestion! By the way, I spoke to another DCC enthusiast (P. Koeleman) who experienced the same/similar issue with his DCC 134). I noticed another weird thing just a minute ago…

I forward the tape to the end (Side A) and then press play (Side A). The player says Play and doesn’t stop, power off or switch to side B. It stays on playing although there is no tape left

. This is behaviour strange, right? This can be reproduced each time. If it stays playing on side A and then manually switch to side B, side B is playing flawless. Switching back after a while the tapes get eaten… arghhhhhhhhh.

Due to this frustration I bought 2 Minidiscs…

It seems to me that the problem is that the take-up spool doesn’t rotate (or doesn’t rotate fast enough), so the tape doesn’t get pulled away from the pinch roller and capstan, and you get problems with fast forward / rewind like you describe.

I don’t know what could cause this, it’s been a while since I last looked at portable recorders/players.

Thanks for your reply, but I would like to explain and summarize a bit more on the issue(s)

. Three things I noticed after (belt) repairing/cleaning this nice little player are:

It all sounds like a mechanical problem to me. Maybe one or both of the reels have too much friction or the belt you have is not tight enough or just a little too thick so it blocks the motor or whatever. It doesn’t sound too difficult to fix really.

I suggested you check the REV/FWD switch, did you do it? Most of the problems like eating tape are caused by a malfunction of this switch. It needs to be desoldered, disassembled and cleaned. I finally had time to fully examine this portable player and therefore also tested the AB switch based on resistance/ohm metering test. The switch seems to work fine, the belt is also placed correectly, the player does play but sometimes during the side switch or startup the tape gets eaten. Fast forward and rewind works like charm,so I guess the only thing left is capstan and/or pinch rollers…