Charity Auction. A DCC 175 plus cable. Proceeds go to the HomeComputerMuseum in the Netherlands

Help us to Help the Help the HomeComputerMuseum in Helmond.

This is a Charity Auction to help the HomeComputerMuseum in Helmond, the Netherlands.
Due to Covid and other unfortunate events, they need our support.
The DCC Museum Is breaking their promise to never list a DCC 175 with Cable on Ebay, because we need them for our yearly music productions.
The DCC 175 is currently owned by the DCC Museum.
This is your chance to obtain in near mint and complete DCC 175 including the rare PC10 DC Cable. Fully restored.
All proceeds will go to the HomeComputerMuseum. 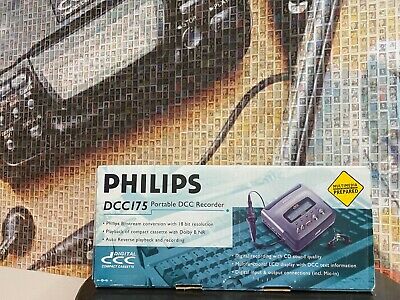 Includes the ultra rare DCC Link Connection Cable PCA 10 DC with software to create your own mixtapes. A Windows 95-98 with Parallel Computer is required (but not included). The unit for sale is fully serviced by the DCC Museum.

The HomeComputerMuseum is an interactive computer museum based in the Netherlands since 2018. In the 11733 ft2 location we have over 500 computers in the museum that were used in homes or are related to computers used at home from 1971 until 2008ish. Most of these computers are hands-on meaning that visitors are allowed and even encouraged to use these computers as they were back in the day, to trigger that nostalgic feeling and release more stories about the history of the computer. There are multiple setups where we created an entire environment as it could’ve been when the computer was released, including time-matching desks, chairs and wallpaper.

We have over 40 enthusiastic volunteers in the museum giving tours, performing repairs, researching stories, developing new ideas, updating our website with information and photos, general archiving and much more. Most of these people have a distance to the labor market caused by a form of autism. The HomeComputerMuseum family, as we call everyone working for the museum, helps them to find their specialism and learn to coop with people. If possible, we will guide them to a long-term and happy paid job of which we already have some success stories.

The HomeComputerMuseum functions entirely independent. No external sponsors or yearly subsidy is given. Therefor we ask entrance fee, do guided tour for businesses and schools, offer a repair service for both old and new computers (no cure no pay), appraise collections of old computers and are the only digital heritage place in the Netherlands where we can read nearly all storage media and convert the data to a modern format by keeping the original computers and software running.

The HomeComputerMuseum is known for its unique collection. World’s largest collection boxed PC games, world’s largest collection of Philips CD-i hard- and software, the largest collection of Philips and Tulip computers, one of the 9 remaining Acorn System 1s, the only working Aesthedes in the world, the Amiga 4000 which was used for the movie Titanic, Apollo 13 and True Lies (discovered by Youtuber Perifractic), the Amiga 2500 used by NASA, Amiga 1200 of Psygnosis, 1 (out of 5) existing computers painted by Dutch painter Herman Brood, several unique prototypes and much more.

We collaborate with nearly all other (computer) museums around the world and exchange knowledge and computers if possible. We’re an open, honest and social museum that is ready for the future by keeping the old computers alive. For it’s the history we need to understand to create a future. See, Feel, Try, Play & Learn.
www.homecomputermuseum.nl